The Seed installation developed from a multidisciplinary collaboration between seven of New Zealand’s top art and design students.

As an introduction to New Zealand, our unique cultural identity and wider cultural traditions, Matariki, a significant Maori celebration of culture, language, spirit and people is applied within ‘The Seed Project, Love: The Southern Sky’. This celebration represents a multicultural link through the appreciation and understanding of the Matariki Stars, also known as the Seven Sisters or the Pleiades constellation, which can be seen from all parts of the world. Coinciding with Matariki on the day of the PQ15 opening, ‘The Seed Project, Love: The Southern Sky’ is composed around the cycles and conditions of Matariki whose movement denotes milestones in the traditional Maori culture, specifically the start of a new phase of life in June. Matariki is also a signal of the time to harvest, to prepare the whenua (land) in anticipation of Spring and to plant certain vegetables to appease the land-based gods Rongo, Uenuku and Whiro. The coming season’s crops were planted according to the portents read in the Matariki star cluster. Traditionally, if the stars were clear and bright, it was a sign that a favourable and productive season lay ahead, and if the stars appeared hazy and closely bunched together, a cold winter was in store and planting was postponed. Matariki occurs at the end of harvesting, when food stores are plentiful. The variety of food which has been gathered and preserved ensures an abundant supply for feasting. Matariki is an important time for festivity to celebrate the change of season and new beginnings.

The origins of Maori weaving lie in the origins of the world itself. Weaving has its own whakapapa (history), connecting the metaphysical and physical realms, ancestors and descendants, humankind and the natural world. The weave is represented physically as a woven tapestry, a transportable archive that visually represents the gathering of stories. ‘The Seed Project, Love: The Southern Sky’, engages with the notion of a woven tapestry (the earth) as a live drawing, a map making installation that is brought into being throughout the duration of the Prague Quadrennial. Within the space the tapestry begins as a ‘loom’. Rope is tensioned between the back wall and the floor, shifting between the vertical and horizontal spatial planes fashioning an abstract curve that sits low to the ground, crafting a space in which members of the NZ student section can lie within to not only allow the act of weaving across the loom but also engage with the public. The tapestry becomes an animated body that we perform and weave publicly within the space, referencing the narratives and cycles of Matariki (cycle of the Pleiades

Constellation) which is represented through different thicknesses of rope. These narratives are further explored through a digital layer (the Southern sky) of projected film works that embody the pictorial effects of the Matariki cycle where the sun has completed its journey to the North and will once again return South bringing warmth, signalling the beginning of the summer solstice and seasonal change. The film work evokes these narratives visually engaging the audience at an atmospheric level. Including durational enactments of Matariki rising over Aotearoa, in three segments. Overlaid upon this film work, an audio track of New Zealand social and meteorological weather conditions, brings the space to life.

Matariki is also a time of gift giving, of finding something of yourself to offer others. As this act is a commonality in many cultures around the world, ‘The Seed Project, Love: The Southern Sky’, inhabits the act of gift giving in multiple ways, as a tactic to encourage the public to engage with our installation, as well as a way for us to extend our performance out of the designated space in the quadrennial and into the wider community of Prague.

(That is a gift that I present to you)

The tapestry offers the audience a textile on which they are asked to perform the act of gifting through choosing a bead (seed) and adding it to the underside of the woven tapestry. This contribution by the audience to choose between beads of various colours and textures represents the enactment of ‘harvesting’ during Matariki and signifies a moment of value, were each bead personally represents each participant’s respect and conservation for the land (woven tapestry). With the completion of the ‘harvesting’, the woven textile’s spatial condition transforms from a suspended tapestry into a mat, on which the celebrations of Matariki occur. 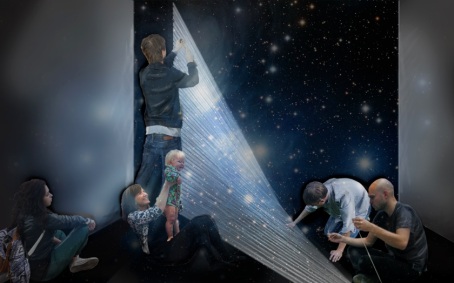